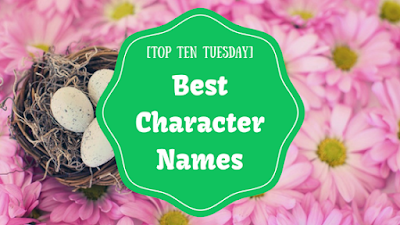 Top Ten Tuesday was created by The Broke and the Bookish but is currently being run by That Artsy Reader Girl. A prompt is given each week, and I hope to do it every week so I always have something going up on Tuesdays. This week I am talking about some of my favorite character names!! I am a big fan of character names and if I was someone who wanted kids I would easily name them some of these! Which honestly makes me think of how many of these and other unique/new literary names I am familiar with will be the names of children in the future, or even now.

What are some of your favorite literary names?

Posted by Heather's Reading Hideaway at 4:21 AM