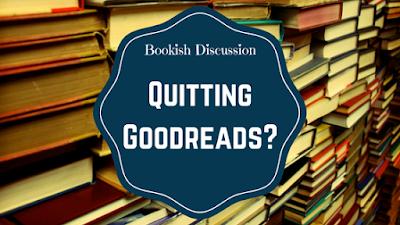 There's been quite a lot of controversy around Goodreads, a social media site for us book lovers, and I just wanted other people's opinions on the topic. I want to know not only all the information about what's happening but also what my options were if I do decide to stop using Goodreads starting in 2018.

Readers and authors alike are angry because Goodreads plans on charging authors money to host giveaways through the website. There have been many angry responses to this. By authors, but also by readers. In this discussion post I am going to talk about my feelings on the recent policy chance involving giveaways and other options other than Goodreads that I am considering switching to, if I switch.

The recent changes to Goodreads giveaways has made it so if you're an author who wants to host a giveaway of your books, you have to pay in order to give away books on their website. The standard package is $119 and the premium package is $599. These prices are absolutely insane. And it's for each giveaway. So if you are an author and you want to have a giveaway for more than one of your books you have to pay each time. There are so many indie authors and publishers who are just trying to get their books in the hands of readers in exchange for reviews and now their books are going to have less chance of being read by more readers unless they shell out $200-$600 which is baffling to me. If the cost is passed to a publisher, then I understand the author won't have to pay, but there are a lot of self-publishers or smaller publishers out there and they may not be able to afford such high costs. And honestly, they shouldn't have to.  It'll also be only open to US readers, despite Goodreads being available to readers outside of the US.Which gives anyone not in the  US a disadvantage and takes away their chance to even choose or not. Which is problematic in itself and makes it harder for readers to read more diversely.

It also seems like this whole thing Goodreads is doing seems to be to push small publishers or self published authors to Amazon's Kindle Direct Publishing because Amazon owns Goodreads. So it's a money hungry cash grab that once again makes it less about community and breaking down walls between author and reader/blogger/reviewer and more about giving big publishers/authors more privileges while backing indie authors or publishers into a corner where they either have to pay a lot of money and/or use Kindle Direct Publishing.

There are so many things Goodreads participants have asked for in terms of upgrades. One being the interface, it looks so old, one being reviewers want half star ratings, also for it to be more of a way for people to communicate. There are so many things they could be using their money on, but instead they're doing this. There are things that the giveaways could have improved on too, one being pushing the winners to review the books they received. I think that is one of the biggest problems with the giveaways, a lot of authors will put up a giveaway, pay the shipping so the winner can receive their prize for winning, and then the author doesn't get any feedback. The new update will have it so eight weeks after winning a book, you get an email to remind you to review it on Goodreads. I think this is something that is a positive, however it does not outweigh the negatives I am seeing.However,  you can't force someone to review a book, and from what I have seen in the conversations since this new update, authors often do not get reviews from giveaway winners. So I am not sure if publishers or authors who can afford the package prices will even bother with the giveaways at all. Which is just less giveaways and engagement for Goodreads. At least when it was free the authors and publishers would give it a shot and get their books out to readers, but now if there isn't a guarantee the reviews will happen and they have to pay, maybe the giveaways will be few and far between.

So, where can we go to instead? Honestly, there isn't much. I hear Litsy is a great app (on both Google Play & Apple Store) to use and although I wish there was also a website to pair with the app, it may be the one I switch to. It's going to be a long process of moving all of the books I've read, all the ones I own, etc over to the app, but I am willing to do it if it is the better option. Another thing I definitely plan on doing is buying a reading journal. I am going to list all the books I've read each year, and then start adding the ones I read in 2018. One reason why I do love Goodreads is that it's a simple way to see all the books you've read each year. So although this is a bit more manual, it may be my only option. Do you know of other book apps or websites that are similar to Goodreads? The more options the better because different websites/apps will work best for different readers. Goodreads has always been biggest book social media website, which is probably why they feel like they can do what they are currently doing.

It makes me feel like Goodreads has gone from this really great website I've been apart of for six plus years to a website that is not supporting the less known, less successful authors/publishers trying to get their stories out there. It just bums me out, because it feels like it's becoming about money and less about the book community. Goodreads, for me, is a place where I have a list of every book I have read basically in the last handful of years or so, a place where I can update what I'm reading with my friends, and a place where I can see what my friends are reading. It's basically Facebook for reading and I've always been here for it. However, now it feels almost dirty to keep using Goodreads, knowing they're doing something so problematic.

As Dumbledore said, "There will be a time when we must choose between what is easy and what is right," and although this seems so minuscule, it isn't for a lot of indie authors/publishers. This could be really detrimental to what books are being talked about and what books are being pushed down and ignored. Indie authors and publishers already have a hard time being heard over big publishers, and this is just another obstacle. So although Goodreads has been an amazing website for so long, despite it's look and lack of updates it's been a place of a great community. If Goodreads changes it's policy back to normal, maybe I'll join back, but I am not even sure if I will because the fact that they thought it was okay in the first place feels insulting. We, as readers, reviewers, book lovers, authors, aspiring authors, etc. are so much smarter than this and I don't think the people making these decisions on Goodreads thinks we are. I feel like we need to voice our concerns. I know it's hard to let go of social media, especially one that revolves around something you love so much, and I am not telling you that you have to quit using Goodreads, but I am asking you to think about the impact of the policy changes and to spread awareness on what is happening.

So, in 2018, after I go through all the books I've read and not only transferred it to a new book app, and after I've made all the lists I need to make, I will probably be deleting the Goodreads app and stop using it on my computer. I am going to use it like normal up until January 1, because I want to have all the books I read in 2017 on my challenge, so I can go through it and write them all down once I get a good journal. It'll be hard, for me personally but for many readers who use Goodreads daily. It's something I have been using for so long that it'll be a rocky transition. But I think it's an important one if we, readers, authors, publishers, expect to be treated with respect. Us as bloggers need to make sure that authors, no matter if they're with a big publisher, small one, or self published,  know that we are here to support them. Especially if you want to be an author yourself one day.

Will you be quitting Goodreads?

Posted by Heather's Reading Hideaway at 8:21 AM