[Top Ten Tuesday] Characters I Like From Books I Disliked 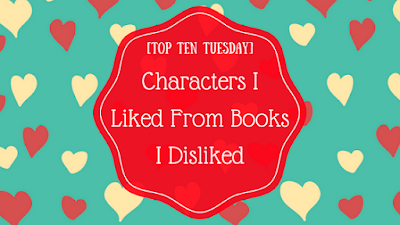 Top Ten Tuesday was created by The Broke and the Bookish but is currently being run by That Artsy Reader Girl. A prompt is given each week, and I hope to do it every week so I always have something going up on Tuesdays. This week I am talking about characters I really enjoyed reading even if I disliked the book they were from.


I recently read and reviewed this book and I wasn't the biggest fan. I didn't love it but I also didn't hate it. However, I really enjoyed the character Izzy. I wish we had gotten more of her because she was a little badass.

In Shaker Heights, a placid, progressive suburb of Cleveland, everything is meticulously planned – from the layout of the winding roads, to the colours of the houses, to the successful lives its residents will go on to lead. And no one embodies this spirit more than Elena Richardson, whose guiding principle is playing by the rules.
Enter Mia Warren – an enigmatic artist and single mother – who arrives in this idyllic bubble with her teenage daughter Pearl, and rents a house from the Richardsons. Soon Mia and Pearl become more than just tenants: all four Richardson children are drawn to the alluring mother-daughter pair. But Mia carries with her a mysterious past, and a disregard for the rules that threatens to upend this carefully ordered community.
When the Richardsons' friends attempt to adopt a Chinese-American baby, a custody battle erupts that dramatically divides the town and puts Mia and Mrs. Richardson on opposing sides. Suspicious of Mia and her motives, Mrs. Richardson becomes determined to uncover the secrets in Mia's past. But her obsession will come at unexpected and devastating costs to her own family – and Mia's.
Little Fires Everywhere explores the weight of long-held secrets and the ferocious pull of motherhood-and the danger of believing that planning and following the rules can avert disaster, or heartbreak.

Look, Adrian's (one of the main characters) family is way more interesting than he is and I don't think we got enough of them. He has two dads and a cute little brother. I loved his moments with his family and it made him much more bearable.

Synopsis:
The Renegades are a syndicate of prodigies — humans with extraordinary abilities — who emerged from the ruins of a crumbled society and established peace and order where chaos reigned. As champions of justice, they remain a symbol of hope and courage to everyone... except the villains they once overthrew.

Nova has a reason to hate the Renegades, and she is on a mission for vengeance. As she gets closer to her target, she meets Adrian, a Renegade boy who believes in justice — and in Nova. But Nova's allegiance is to a villain who has the power to end them both.


Lysandra is probably the best female character in this book. I have been over Aelin since Heir of Fire honestly. I think with what she has been through and how much her character has grown I'm just a big fan. But I am getting sick of this series as a whole. This is book four, so the snyopsis will be for book one, Throne of Glass, to avoid spoiling anyone who hasn't read the series.

Synopsis (of Throne of Glass)
After serving out a year of hard labor in the salt mines of Endovier for her crimes, 18-year-old assassin Celaena Sardothien is dragged before the Crown Prince. Prince Dorian offers her her freedom on one condition: she must act as his champion in a competition to find a new royal assassin.

Her opponents are men-thieves and assassins and warriors from across the empire, each sponsored by a member of the king's council. If she beats her opponents in a series of eliminations, she'll serve the kingdom for four years and then be granted her freedom. Celaena finds her training sessions with the captain of the guard, Westfall, challenging and exhilarating. But she's bored stiff by court life. Things get a little more interesting when the prince starts to show interest in her ... but it's the gruff Captain Westfall who seems to understand her best.

Then one of the other contestants turns up dead ... quickly followed by another. Can Celaena figure out who the killer is before she becomes a victim? As the young assassin investigates, her search leads her to discover a greater destiny than she could possibly have imagined.

Look, this book may have a gorgeous cover but the inside is actual trash. However, the character of Scorpius is the only good part. Granted he is not good enough to make this book not the worst. But I enjoyed his character and how cute he was.

*Not sharing the synopsis because I don't want to have to read even a sentence from the trash fire that is this story.*


I love the gang in this series, and the first three books are pretty good! But once we get to the fourth  book (The Final Warning) things kind of gets messy. It's up and down with the quality but overall I never stopped loving the gang. One day I'd love to re-read this series. The synopsis below is for the first book (The Angel Experiment).

Synopsis (The Angel Experiment):
Six unforgettable kids — with no families, no homes — are running for their lives. Max Ride and her best friends have the ability to fly. And that's just the beginning of their amazing powers. But they don't know where they come from, who's hunting them, why they are different from all other humans... and if they're meant to save mankind — or destroy it.


Sorry I could only think of five! Typically, if  I don't like a book  I also don't like the characters. So this was really hard! But I still wanted to participate because these five definitely fit this prompt!

Posted by Heather's Reading Hideaway at 11:30 AM