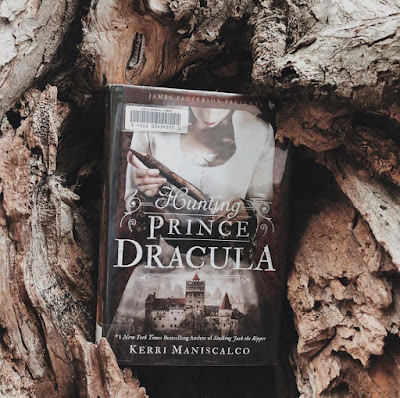 In this New York Times bestselling sequel to Kerri Maniscalco's haunting #1 debut Stalking Jack the Ripper, bizarre murders are discovered in the castle of Prince Vlad the Impaler, otherwise known as Dracula. Could it be a copycat killer...or has the depraved prince been brought back to life?

Following the grief and horror of her discovery of Jack the Ripper's true identity, Audrey Rose Wadsworth has no choice but to flee London and its memories. Together with the arrogant yet charming Thomas Cresswell, she journeys to the dark heart of Romania, home to one of Europe's best schools of forensic medicine...and to another notorious killer, Vlad the Impaler, whose thirst for blood became legend.

But her life's dream is soon tainted by blood-soaked discoveries in the halls of the school's forbidding castle, and Audrey Rose is compelled to investigate the strangely familiar murders. What she finds brings all her terrifying fears to life once again.

Although I definitely liked this one more than the first one, I didn't fully love it. I am still unsure if I want to continue this series, but if I do I hope they continue to get better for me. I so badly wanted to 100% love this book and be on board with so many of the readers who love this series. And although my biggest (and really, only) issue with the story doesn't seem like the biggest problem, it did greatly impact my enjoyment.


"For there are no limits to the stars, their numbers infinite. Which is precisely why I measure my love for you by the stars. An amount too boundless to count."

Two characters are the best part of the story. I love Audrey Rose and Thomas's friendship and relationship so much. I think it's gradual, natural, and I really enjoy their chemistry. One of my cons about the previous book, Stalking Jack the Ripper, was that the "feminism" was forced, fake, and often promoted girl on girl hate. In Hunting Prince Dracula, it definitely improved. I loved that Audrey Rose stood up for herself and proved herself worthy of being at Bran Castle learning forensics with the rest of the classmates, who were all men. The misogyny she experienced because she was a women was infuriating. I also really liked that although Thomas wanted to help it made things worse, and Audrey called him out for it. I think her educating him on what it is to be a woman in a man dominated career. I do wish that Audrey had developed closer relationships with the women characters introduced in this story because of how Audrey judged any woman who was traditionally "girly" in book one I was hoping  there would be some sort of redemption on that. Unfortunately I think that it didn't really happen. We are supposed to think that Audrey has become close with some of the women but I didn't feel their friendships at all. However, I did really like the wlw romance between Thomas's sister Daciana and Ileana, a woman working as a maid in the castle. We don't see enough of them and I'd love them to have a bigger part in the series or even have their own story.

The plot was the biggest disappointment for me. The beginning and the end were exciting and suspenseful but a good chunk in the middle just dragged for me. I lost any interest in the plot and I even found myself having difficulty with feeling anything when shocking things happened in the story. Despite really liking the two main characters I didn't feel invested in their well being and I especially didn't feel invested in the side characters. It took me far too long to finish Hunting Prince Dracula because I never wanted to pick it up. It affected my reading experience and I never felt that need to keep reading. Except so I could finally finish it and move onto a different book. I was really worried I'd be in a reading slump and honestly if I wasn't so excited about the books I picked for my October TBR it could have happened.


"There's something powerful in that kind of love, something that deserves to be kindled and tended to, even when its embers are flickering dangerously close to darkness."

I love Kerri Maniscalco's writing style. It's elegant and descriptive. She writes romantic chemistry so well and I loved the dialogue between Audrey and Thomas. Their witty banter and bickering felt fun and natural. I think the romance in the story is probably my favorite part of the series as a whole because individually the characters have flaws that kind of drive me insane but together I think they work extremely well with each other. Maybe I am the only one, and I know that this is a weird reference (also, although I enjoyed the movie when I was younger all of it as a whole doesn't fully age well) they kind of reminded me of Brendan Fraser and Rachel Weisz's characters in The Mummy. I cannot explain why but they just burned their younger selves in my brain as these characters. If I do end up picking up the third book, Escaping Houdini, it will to be able to see where their relationship goes.

The atmospheric writing and setting made a perfect mood for my first October read. And although I felt like the pacing was off and the book was probably 60-100 pages too long I did find myself spooked in moments. Mostly at the beginning and end, the spider scene in particular gave me chills by my side and you can guarantee  I put up every strand of my hair in a bun because every time they touched my shoulders I felt spiders. If this book had better pacing and maybe a bit more of an exciting plot I could have easily given this book a 4 or a 5. I don't think I've ever read a book where I cared so little about the plot and that was the biggest focus of the story. Which is such a bummer.


"Monsters were in the eye of the beholder. And no one wanted to discover their hero was the villain of the story."

Overall, I know this series has an outspoken enthusiastic fanbase so I assume my problems with these books are more of a me thing than a book thing. They just seem to not be 100% my thing, which is fine. I may pick up the third one in the future and if Kerri Maniscalco writes anything else in the future I'd definitely give it a shot. If you are interested I say pick it up and try it out, it could be right what you need this Autumn season.