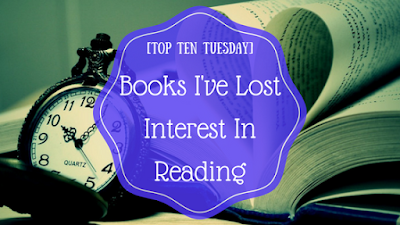 Top Ten Tuesday was created by The Broke and the Bookish but is currently being run by That Artsy Reader Girl. A prompt is given each week, and I hope to do it every week so I always have something going up on Tuesdays. This week I am talking about the books that I have absolute interest in reading. Now, this is my feelings in this moment of my life and they could always change. Also, if one of your favorite books are on this list, this isn't a personal attack on you. We should all agree that we all have different interests. I do get a bit harsh during some books, so understand that tese are my opinions and I won't allow rude comments. Thanks for understanding, and enjoy my list! I'd love to know some of books you don't have any interest in reading.

Let me start off with probably the most controversial one. I think this book has been deemed the most trash out of all of her trash books. So if I picked up any of her books in the future (I won't) this most definitely won't be the one. I think her books are super problematic, badly written (the only ones I have read are Ugly Love & Confess), and unrealistic. Which is so weird because most (all?) of her books are contemporary romances. I will never understand how her books are so popular.

I have read the first book a few times and I really wasn't a fan of it at all. The concept was really cool and I remember I even preordered the first book because of how excited I was. But the writing and execution just wasn't for me so I probably won't be continuing the series.

I have tried reading this book three or four times now. I just cannot get into it. I have gotten about half way two times now and every time I end up picking up something better. My problem with this is that I like the Mortal Instruments series (I have read the first three) and really would like to continue but I know these should be read next. I plan on doing something super blasphemous when it comes to reading and just look up what happens when I am ready to continue with TMI.

Carve the Mark by Veronica Roth

I read and loved the Divergent trilogy when it came out. I didn't even know Roth was coming out with another book until the controversy exploded with this book. I read the synopsis and didn't feel particularly interested in reading it.  Then I read everything with the controversy and I just decided I'd stay away. I still haven't been very interested in it even after the controversy has died down.

I am using this one as a place holder for all of Morgan Matson books. I am just not interested in that kind of summery contemporary story genre. I listened to her book Second Chance Summer on audiobook a while back and I did enjoy it! But I am just not feeling her other books.

Saint Anything by Sarah Dessen

This is basically the same lines of Morgan Matson. I am just not interested in the summery contemporary stories that Sarah Dessen is known for. Maybe I just haven't read the one Sarah Dessen book that makes me a fan. I already don't always love contemporary books so when I pick them up they have to already be pretty hyped.

The Martian by Andy Weir

I really enjoyed the movie adaptation, but not enough to pick up the book. I do have it on my kindle, so there's definitely a possibility one day I'll read it. But for now I am just not interested in reading it.

The 5th Wave by Rick Yancey

I actually have read this book, and I really liked it. But it's been too long and I don't feel too interested in reading the sequels. I don't hear great things and I have so many other books to read. This is definitely one of the "never say never" type moments, because I could one day get interested. I haven't even seen the movie yet, which is surprising because the main actress, Chloe Grace Moretz, is one of my favorite actresses.

In college I was being recommended this book a lot and I was so excited to read it. I got it from my library, read it, and kind of hated it. I thought it was badly written and boring. Which was a disappointment but I had plans of continuing the series and giving it another shot. A couple years later when the movie was being made there was talk about boycotting the movie because the author was super homophobic, so I decided I wouldn't continue with the series.

The Knife of Never Letting Go by Patrick Ness

I heard great things about this book. I tried reading it a couple of times but I couldn't really get into it. I am not sure why because I've read Ness's A Monster Calls book and absolutely loved it. There's just something about this story I cannot get into and the more times I try reading the more annoyed I get with the book.

Posted by Heather's Reading Hideaway at 10:30 AM