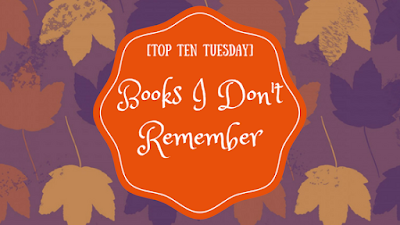 Top Ten Tuesday was created by The Broke and the Bookish but is currently being run by That Artsy Reader Girl. A prompt is given each week, and I hope to do it every week so I always have something going up on Tuesdays. This week I am talking about the books I know I have read, but I remember nothing when it comes to the content. This is not at all shade towards the authors or these books. Most of this is on me, reading too quickly years ago and not letting myself fully absorb what was happening.

The Saga Series by Brian K. Vaughan.
I read up to volume four I believe and I remember really loving it! But I do not remember almost anything that happens in this series.

Synopsis:
When two soldiers from opposite sides of a never-ending galactic war fall in love, they risk everything to bring a fragile new life into a dangerous old universe.

From bestselling writer Brian K. Vaughan, Saga is the sweeping tale of one young family fighting to find their place in the worlds. Fantasy and science fiction are wed like never before in this sexy, subversive drama for adults.

The Sacred Lies of Minnow Bly by Stephanie Oakes
I buddy read this with a friend really quickly in early 2016 and I remember absolutely nothing. I own it, so I may re-read it at some point but all I remember is what you'd learn from the synopsis on the back of the book.

Synopsis:
The Kevinian cult has taken everything from seventeen-year-old Minnow: twelve years of her life, her family, her ability to trust.

And when she rebelled, they took away her hands, too.

Now their Prophet has been murdered and their camp set aflame, and it's clear that Minnow knows something—but she's not talking. As she languishes in juvenile detention, she struggles to un-learn everything she has been taught to believe, adjusting to a life behind bars and recounting the events that led up to her incarceration. But when an FBI detective approaches her about making a deal, Minnow sees she can have the freedom she always dreamed of—if she’s willing to part with the terrible secrets of her past.

Every Last Word by Tamara Ireland Stone
I own this one on my kindle, so it could be another re-read but I honestly remember only that the main character has OCD. Which once again is something you find out on the back of the book.

Synopsis:
Samantha McAllister looks just like the rest of the popular girls in her junior class. But hidden beneath the straightened hair and expertly applied makeup is a secret that her friends would never understand: Sam has Purely-Obsessional OCD and is consumed by a stream of dark thoughts and worries that she can't turn off.

Second-guessing every move, thought, and word makes daily life a struggle, and it doesn't help that her lifelong friends will turn toxic at the first sign of a wrong outfit, wrong lunch, or wrong crush. Yet Sam knows she'd be truly crazy to leave the protection of the most popular girls in school. So when Sam meets Caroline, she has to keep her new friend with a refreshing sense of humor and no style a secret, right up there with Sam's weekly visits to her psychiatrist.

Caroline introduces Sam to Poet's Corner, a hidden room and a tight-knit group of misfits who have been ignored by the school at large. Sam is drawn to them immediately, especially a guitar-playing guy with a talent for verse, and starts to discover a whole new side of herself. Slowly, she begins to feel more "normal" than she ever has as part of the popular crowd . . . until she finds a new reason to question her sanity and all she holds dear.

The Way of Shadows by Brent Weeks
I remember really enjoying this book enough to buy the sequel. But I never read the sequel and now I don't remember anything in this one. So I'll have to re-read it before continuing. Honestly, I kind of want to read them this year. They've been on my shelf for a while and I remember it being a good fantasy story. Plus, I gifted the trilogy to my dad for his birthday last year so I should probably read them so we can talk about them.

Synopsis:
For Azoth, survival is precarious. Something you never take for granted. As a guild rat, he's grown up in the slums, and learned to judge people quickly - and to take risks. Risks like apprenticing himself to Durzo Blint.

But to be accepted, Azoth must turn his back on his old life and embrace a new identity and name. As Kylar Stern, he must learn to navigate the assassins' world of dangerous politics and strange magics - and cultivate a flair for death.


The Monstrumologist by Rick Yancey
I read this in early 2015 and I remember it being a little spooky and overall really good. But I do not remember anything about the plot. Like many of the books on this list it's one I own but I am not sure how interested I am in reading it again. At least right now.

Synopsis:
These are the secrets I have kept. This is the trust I never betrayed. But he is dead now and has been for more than forty years, the one who gave me his trust, the one for whom I kept these secrets. The one who saved me . . . and the one who cursed me.

So starts the diary of Will Henry, orphaned assistant to Dr. Pellinore Warthorpe, a man with a most unusual specialty: monstrumology, the study of monsters. In his time with the doctor, Will has met many a mysterious late-night visitor, and seen things he never imagined were real. But when a grave robber comes calling in the middle of the night with a gruesome find, he brings with him their most deadly case yet.

A gothic tour de force that explores the darkest heart of man and monster and asks the question: When does man become the very thing he hunts?

Another Little Piece by Kate Karyus Quinn
I read this so long ago and bought it on my kindle even a longer time ago. I don't remember anything but I do remember being unhappy with it. I think my rating has me interested in reading it again and seeing if maybe I'd like it more this time around.

Synopsis:
On a cool autumn night, Annaliese Rose Gordon stumbled out of the woods and into a high school party. She was screaming. Drenched in blood. Then she vanished.

Now Annaliese is haunted by strange visions and broken memories. Memories of a reckless, desperate wish . . . a bloody razor . . . and the faces of other girls who disappeared. Piece by piece, Annaliese's fractured memories come together to reveal a violent, endless cycle that she will never escape—unless she can unlock the twisted secrets of her past.

Memoirs of a Teenage Amnesiac by Gabrielle Zevin
I read this when a booktuber I  love raved about it years ago. I read it and found myself disappointed, but I was also in that time in my life where I didn't like giving bad ratings in books despite not liking them. So although I have negative feelings towards the book, my past rating shows that I liked it. So that's confusing. I know I owned it at one time but I am not sure if I still do.

Shadow and Bone by Leigh Bardugo
I know this is a popular series, and past Heather did give the first book three stars which means she at least enjoyed it. But I remember almost nothing from the book. I would like to re-read it and get into the series sometime because of all the hype.

Synopsis:
Surrounded by enemies, the once-great nation of Ravka has been torn in two by the Shadow Fold, a swath of near impenetrable darkness crawling with monsters who feast on human flesh. Now its fate may rest on the shoulders of one lonely refugee.

Alina Starkov has never been good at anything. But when her regiment is attacked on the Fold and her best friend is brutally injured, Alina reveals a dormant power that saves his life—a power that could be the key to setting her war-ravaged country free. Wrenched from everything she knows, Alina is whisked away to the royal court to be trained as a member of the Grisha, the magical elite led by the mysterious Darkling.

Yet nothing in this lavish world is what it seems. With darkness looming and an entire kingdom depending on her untamed power, Alina will have to confront the secrets of the Grisha . . . and the secrets of her heart.

Across the Universe by Beth Revis
I read this series years ago in college and loved it, but besides the synopsis I don't remember anything about what happens. I have the books on my shelf and would love to re-read them maybe this year!

Synopsis:
Seventeen-year-old Amy joins her parents as frozen cargo aboard the vast spaceship Godspeed and expects to awaken on a new planet, three hundred years in the future. Never could she have known that her frozen slumber would come to an end fifty years too soon and that she would be thrust into the brave new world of a spaceship that lives by its own rules.

Amy quickly realizes that her awakening was no mere computer malfunction. Someone—one of the few thousand inhabitants of the spaceship —tried to kill her. And if Amy doesn't do something soon, her parents will be next.

Now Amy must race to unlock Godspeed's hidden secrets. But out of her list of murder suspects, there's only one who matters: Elder, the future leader of the ship and the love she could never have seen coming.


Hush, Hush by Becca Fitzpatrick
I remember nothing about this book other than I liked it enough to give it four stars. I have positive feelings related to this book so I do think I liked it. However, I may be a bit too old for it now. But maybe not, maybe I can re-read it and keep going with the series one day.

Synopsis:
Romance was not part of Nora Grey's plan. She's never been particularly attracted to the boys at her school, no matter how hard her best friend, Vee, pushes them at her. Not until Patch comes along. With his easy smile and eyes that seem to see inside her, Patch draws Nora to him against her better judgment.

But after a series of terrifying encounters, Nora's not sure whom to trust. Patch seems to be everywhere she is and seems to know more about her than her closest friends. She can't decide whether she should fall into his arms or run and hide. And when she tries to seek some answers, she finds herself near a truth that is way more unsettling than anything Patch makes her feel.

For she is right in the middle of an ancient battle between the immortal and those that have fallen - and, when it comes to choosing sides, the wrong choice will cost Nora her life.

Which books do you not remember the plot of but have specific feelings towards with no memory of why?

Posted by Heather's Reading Hideaway at 8:22 AM