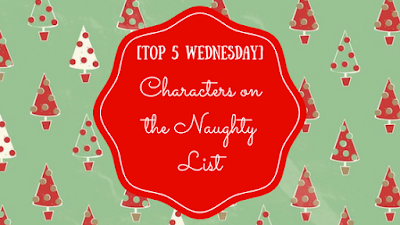 Don't get me wrong, I love the Weasley twins, but they definitely come to mind instantly when I think of the naughty list. They are constantly pranking people, breaking the rules, antagonizing their siblings, and getting in trouble. They're lovable troublemakers, but definitely naughty list worthy.

I don't want to get too into why I think Evie deserves to be on the naughty list, because it could be considered a spoiler, but some of Evie's actions definitely show her as a bit selfish. She is kind of self centered, although I think she is a good person who grows and learns, she definitely is naughty list material.

Victoria Wright (The Cavendish Home For Boys and Girls)

Victoria would probably be insulted at even the idea of being on the naughty list. But honestly, I think her selfishness could have landed her on the naughty list. Granted, like Evie, Victoria learns her lesson and grows a character by the end. So I am specifically talking about the Victoria we know for a good 3/4 of the book. She sees herself as a perfect daughter, student, child, but she is also narrow minded and she lets that affect her friendships negatively.

Martin is the character off this whole list I think deserve to be on the naughty list for more serious reasons. He blackmails the main character, Simon, by saying he will out Simon as gay unless Simon gets Martin a date with his friend. Although Martin does have a good character arc of growth, he definitely has a long way to go and I think would be on the naughty list.

Lisa uses Soloman's mental illness for her own gain. She is hoping she can "cure" him so she can use her findings to get into a psychology program for college. It's incredibly selfish and morally it's not okay. Like many characters on this list, she learns and grows by the end of the novel, but it still rubbed me the wrong way and I couldn't fully love her as a character.


Posted by Heather's Reading Hideaway at 6:17 AM