[Book Review] Eliza And Her Monsters by Francesca Zappia 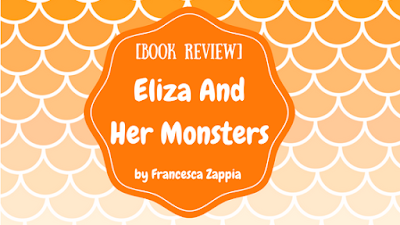 Eliza Mirk is an eighteen year old senior impatiently wanting her high school career to come to an end. She focuses most of her time working on Monstrous Sea, a incredibly popular webcomic that she created anonymously a few years ago as LadyConstellation. She prefers her life online, she has two close online friends, a massive following because of her art, and she finds herself more at home with her sketchpad than she does with her family or anyone at school. Until a new boy at school motivates her to start living life off her computer and out of her sketchbook.

This book absolutely blew me away. So much so, that I am having troubles figuring out how to even explain how much I loved this book. Or even why I love it! Unless my urge to just type "GO READ IT NOW" a million times is enough.


"The computer was my rabbit hole; the internet my wonderland."

First, let's start with the two main characters. Eliza is a relatable character for many different reasons. One being her internet social life versus her life offline. Having friends on the internet you feel closer to than you do in real life is something  that so many people today deal with and I even have experienced it. She's incredibly shy and introverted to the point where she's basically mute in school. Her relationship (or lack of) with her family seemed realistic to her situation, and although I got frustrated with the way Eliza was with her parents, I got really frustrated with them too. I really loved Eliza's brothers and I loved their moments together in the last half of the book. Then there is Wallace, another character who doesn't talk much in school, but opens up slowly to Eliza (and her to him) because of their shared love for Monstrous Sea. I really like that Wallace also was incredibly introverted, and the author had them slowly come out of their shells a little. Versus a more extroverted guy kind of pushing the quite shy girl out of her shell. Wallace and Eliza's friendship, and then relationship, forms naturally and honestly it's freaking adorable. It almost gave me Eleanor and Park feels. In Eleanor & Park by Rainbow Rowell both of them bond over silently reading comics on the bus to and from school. They rarely talk at first, which is a little different because Eliza and Wallace talk through notes back and forth. But both couples have this sweet innocence about them. I also like that Wallace writes fanfiction, because I feel like I've seen fanfiction portrayed as more of a female activity versus male activity. So I am happy Wallace is the one that does the writing, and that he is so great at it.


"You found me in a constellation."

The writing itself is so well done. I was easily hooked into the story because of how much I loved the characters and the focus on the internet itself. I think what helped a lot is that although both Wallace and Eliza are still in school, they're eighteen, and they acted eighteen. They seemed more mature than most high school characters, but immature enough to make stupid decisions, because they may be legally adults but really they're still just kids. I found the writing really believable throughout the whole story, but especially when it came to this aspect of the book.

I have a few real cons with this book. My first con isn't even really a huge deal but it is that I wasn't as invested in the Monsters of Sea story line woven through the main story. It's scarce and only pops up a half a dozen times or so, but I found myself skimming the story. I though the art was really cool, but the story itself was hard to follow because we were only getting chunks. It reminded me of how I would skim the Simon Snow sections of Rainbow Rowell's book Fangirl. My other con is that there is a part of the mental health aspect to the story that I feel like needed to be discussed more. My last and probably biggest issue with the book was Wallace at the end, I won't go into any spoilers but I don't like the way his character developed. I really liked him for most of the book, and then the last eighty to hundred pages or so is when I started to dislike him as a character. I do like that he is flawed and he acknowledges his mistakes, but some of the things he did and said rubbed me the wrong way. Especially since he is apart of the Monstrous Sea fandom and knows how intense the fans are. I definitely didn't hate him by the end of the story, but I didn't like him as much as I did when we first got to know him.


"There is a small monster in my brain that controls my doubt. The doubt itself is a stupid thing, without sense or feeling, blind and straining at the end of a long chain. The monsters, though, is smart. It's always watching, and when I am completely sure of myself, it unchains the doubt and lets it run wild. Even when I know it's coming, I can't stop it."

The way Zappia tackled mental illness was super relatable and realistic. I never found it to feel inauthentic or melodramatic. Eliza's anxiety is something she deals with throughout the book in small ways and it escalates the more her lies get out of hand and she loses control. Eliza doesn't like losing control, which is something I can really relate to. So when she does, things get worse for her and she either gets angry and defensive or she curls into herself. I think Eliza's mental illness is so well done and I am so happy to see more accurate representation in young adult literature. I think that Wallace's tragic backstory and his anxiety with talking too loud or too much was also really well done. You definitely feel for him and understand where he's coming from most of the time.

There are a few side characters I wouldn't have minded getting to know a little more. One example being Wallace's friends. Some point in the story Eliza says that they've become her friends also, and I really would have liked her to interact with one of them a bit more. Especially since most of the time she hangs out with them, she's quiet. It would have been cool to see her make friends versus being told she made friends. Maybe someone like Megan or Chandra. It would have been nice to see her interact with a girl her age in real life. I know she has her online friend Em, but the conversations between them mostly consisted of Wallace or Monstrous Sea. It would have been nice to see her have more moments with her new friends.

I completely believed that these characters had a different relationship with the internet than older generations. From the parent's lack of interest in Eliza's online life, to them thinking that getting a package from one of her friends was dangerous because strangers know their address. Or Wallace's parents not understanding fanfiction and wanting him to write his own stories. It all is realistic and things I feel like many people in my generation and younger have to deal with because we basically grew up with the internet and fandom. The way fandom was handled in this book is so spot on that you can tell that the author is apart of fandom in some way. The way it works, the way it interacts with Monstrous Sea and the art Eliza puts out, and even the fact that Eliza's friend Em has set up a website with merchandise and Max bans and goes through to delete any nasty comments.

I really liked that Wallace wrote out this whole email to Eliza, because saying it out loud was too daunting. I've been there in that situation so many times, where sending an email or a text of embarrassing or sensitive information is easier because of anxiety of having to watch them read it and then respond.


"Maybe that's normal. The things you care most about are ones that leave the biggest holes."

Overall, I highly, highly recommend this book. I cannot recommend it enough. I recently found out that the Children of Hypnos series that Eliza gets Wallace into is actually an actual story that the author posts on Tumblr and Wattpad. Which I think is so cool! I am definitely looking into it sometime this summer.