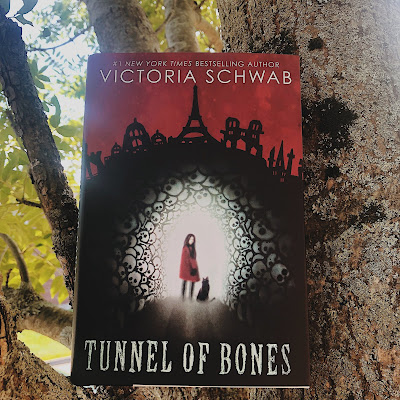 Trouble is haunting Cassidy Blake . . . even more than usual.

She (plus her ghost best friend, Jacob, of course) are in Paris, where Cass's parents are filming their TV show about the world's most haunted cities. Sure, it's fun eating croissants and seeing the Eiffel Tower, but there's true ghostly danger lurking beneath Paris, in the creepy underground Catacombs.

When Cass accidentally awakens a frighteningly strong spirit, she must rely on her still-growing skills as a ghosthunter -- and turn to friends both old and new to help her unravel a mystery. But time is running out, and the spirit is only growing stronger.

And if Cass fails, the force she's unleashed could haunt the city forever.

This was absolutely amazing! It was even better than the first one, which is definitely saying something because I adored City of Ghosts (review above). Tunnel of Bones only cemented my love for this story, these characters, and Victoria Schwab's writing.

"That's how friendship works. You learn to share the weight."

Cassidy is such a great hero for all ages but especially young readers to read about. As a Gryffindor myself,  I really respect her bravery and willing to put herself in danger to not only help others but to do the right thing. She throws herself into situations without thinking, which sure isn't always the best trait to have, but I think her desire to help people and keep herself and her loved ones safe was admirable. We also get to know Jacob on a deeper level too. Jacob is so precious and I love him so much. I love his friendship with Cassidy and although they have a lot of tension in this story, their sweet moments are so rewarding because you can really see their bond grow stronger. We don't have as much of Lara as we did in the first book, because she is still back in Scotland where City of Ghosts was set, but I do like Cassidy's friendship with her. Schwab uses technology seamlessly in this book thew way Cassidy and Lara text, call, and video chat. Lara's very proper and almost strict tone comes through well even through text and I found myself missing her.

I love Cassidy's parent's presence in both books, but especially in this one. Maybe it's because of the stories I've read (and watched) in the past with younger main characters but I always expect the parents to be a bit absent so the main character can freely go on their adventures. But instead, they give her the space she needs to be herself. Unless when she proves herself to be a bit reckless, which is honestly often, but even then they aren't overly strict and they don't keep a tight leash on her. I really love Cassidy's relationship with her parents.  It's sweet and I love how excited, passionate, and enthusiastic they are about their work. It explains some of Cassidy's own enthusiasm.

The antagonist of this story is so creepy. I feel like it's fairly easy to make a little dead kid creepy but Schwab really turned it up a notch. I'm not surprised, I remember the creepier aspects of her Verity City duology. She writes creepy scenes incredibly well and the way they build up is terrifying. The imagery is haunting. Between the ghosts, the multiple versions of the Veil, the creepy little ghost boy with red eyes and aura around him, and the Catacombs themselves I definitely felt a bit of a chill while reading. It wasn't only haunting in a spooky way but it also was haunting in a devastating way. The way everything is unraveled and revealed had my heart sad for the little ghost boy and our little ghost boy, Jacob. Overall this book kind of had me all in my feelings.

There aren't as many in this book as City of Ghosts, but one criticism I saw a lot in other reviews of the first book was the Harry Potter and superhero references. Personally, I really like them and I think they add to the story. I don't have a problem with the handful of passing Harry  Potter references or Jacob's love for comics. For me, it makes the characters feel more real and you get a better look at their interests. I think often if a character in a book mentions they're really into something but it never comes up again it feels like a throwaway line. But with Schwab she makes it a part of the character and I like that because it feels like it does in real life. The way stories stick with us and become a part of us.

One aspect  I really enjoyed was the drastic comparison between Scotland and France. With Scotland (the setting of City of Ghosts) the locals more or less believe in ghosts. Either they personally or someone they know has had a strong enough paranormal experience that it's just common knowledge that ghosts exist. Well, the personal experience and book and books of history. There is just a general consensus that yes, ghosts exist and we respect them. But in Paris, it's more private. In Cassidy's experience in Paris (and Lara even agrees from when she visited) Paris is incredibly haunted. But the locals of Paris are less likely to admit that they've experienced something paranormal. Or that they believe, even when they do indeed believe in ghosts. I found that really interesting and it wasn't something I thought about much until I was reading. I wonder how the locals in New Orleans, the setting for the third book Bridge of Souls, will compare to both the locals in Scotland and France.

Overall, I cannot recommend all of Schwab's books but especially this middle grade series. I think Schwab is one of the best authors of our time and is consistently publishing amazing stories. She is some sort of magic maker. Every single time I read a new release, or even re-read a favorite, I am reminded why she is my favorite author. She typically advertises this story as Stranger Things + Ghost Hunters. Which I absolutely see. But I think it also has some Danny Phantom + Coraline vibes also. So if any of those are interesting to you I recommend this to young and adult readers. I already am waiting for when we can pre-order Bridge of Souls because that ending has me so intrigued and pumped for what's to come.

Posted by Heather's Reading Hideaway at 10:44 AM