[Top Ten Tuesday] Book Characters I'd Love To Be Friends With

Top Ten Tuesday was created by The Broke and the Bookish but is currently being run by That Artsy Reader Girl. A prompt is given each week, and I hope to do it every week so I always have something going up on Tuesdays. This week I am talking about book characters I'd love to be friends with! It was fairly easy to think of ten characters I'd love to be friends with because I love reading character driven stories. Characters are my favorite part of reading.

When I was younger, Harry, Ron, and Hermione were basically my friends. I re-read the books over and over again until the next release and that was a cycle for me. I read other books, and then circled back to re-reading these. They're home. I know this isn't a unique experience, and I expect this to be a popular answer this week.

I love the gang of friends in this story. They're such an amazing group of found family and they fill me with such happiness. I think each individual character is so amazing, and the way they protect and love each other is so heartwarming. If you're in this group or one like it, it's a forever thing.

Class 1-A is such a fantastic group of students who all take care of each other and help each other improve to become better heroes. I often love the volumes that include more classmates a little extra because  I love the way they work together to defeat villains. They've been through a lot from the beginning of their school careers, and I think it brought the students closer.

Other than some single issues of comics, I haven't read many Teen Titans comics, so the only versions of Raven I know are from both the original show and Teen Titans GO! And of course I love Raven in both of them, but getting to know her on her own has been great. I really love this edition of Raven and I am excited for this series to continue. Raven is such a sweet friend and although she's been through a lot of confusing situations she proves herself to be a good friend in this book!

This is one of the cutest comic books ever! It's this world of supernatural creatures and everything is so cutesy. Julie and Serena are the cutest werewolf couple. And Chet is a fantastic trans centaur. They obviously care about each other and take care of each other which is so sweet. If you were friends with them it would definitely be for life. They're loyal and kind.

Talking about loyal and kind, Jamie Watson is such a good friend. Charlotte is a lot to deal with when it comes to friendships, and there's never a dull moment both in a positive and negative way. And I think he continuously proves himself to be a loyal and trustworthy friend. I think Jamie would be a fantastic friend. 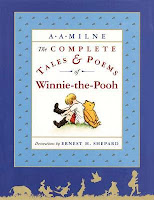 Winnie the Pooh is one of my favorite stories from my childhood. I have always loved stories of Winnie and his friends in the Hundred Acre Wood. So of course it would have to hold a spot on this list. Earlier this year I watched the film Disney's Christopher Robin and it easily became one of my favorite movies I saw this year but also as a whole.

Millie is literal sunshine in a character. She doesn't give up on people. She trusts in the good in people and does what she can to make them happy. Some may see her as a bit annoying, or a lot to handle because of how positive and optimistic she can be but I think that is something to admire in a character or even a person.

Mila and Riley just seem like really awesome girls to be friends with. They're well practiced witches, so as a baby witch myself I feel like I could learn a lot from them. They're loyal to each other, to the point where  Mila attempts to bring Riley back to life (not a spoiler, it's in the book's synopsis). While reading this story I just felt like they'd be great friends. It's been about a year since I've read it and I still think about Mila, Riley, and the book as a whole often since then.

Being my favorite superhero, of course Faith had to be on this list! Faith is such a good person and she just wants to help people. From her friendships in the comics it's evident that she is a great friend and I would be so happy to be her friend! She's also a huge nerd with a big heart and badass superpowers. I think we'd be awesome friends.

Who are some characters you'd love to be friends with?

Posted by Heather's Reading Hideaway at 11:01 AM