[Book Review] Anger Is A Gift by Mark Oshiro 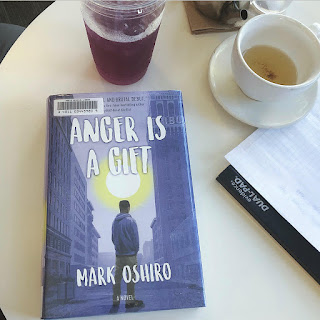 Six years ago, Moss Jefferies' father was murdered by an Oakland police officer. Along with losing a parent, the media's vilification of his father and lack of accountability has left Moss with near crippling panic attacks.

Now, in his sophomore year of high school, Moss and his fellow classmates find themselves increasingly treated like criminals by their own school. New rules. Random locker searches. Constant intimidation and Oakland Police Department stationed in their halls. Despite their youth, the students decide to organize and push back against the administration.

When tensions hit a fever pitch and tragedy strikes, Moss must face a difficult choice: give in to fear and hate or realize that anger can actually be a gift.

"Anger is a gift. Remember that. You gotta grasp onto it, hold it tight and use it as ammunition. You use that anger to get things done instead of just stewing in it."


This book was incredibly emotional and had me in tears throughout  the entire book. If you've read The  Hate U Give by Angie Thomas or Dear Martin by Nic Stone and enjoyed them both, you'll probably really enjoy this one as well because they all tackle similar topics.

Moss, our main character, deals with crippling anxiety and panic attacks ever since his father was shot and killed by the police. The way Moss experiences panic attacks and anxiety is so similar to how I experience them that I was a bit shaken by reading those scenes. It was like it was coming from my own experiences. My thoughts and the reason why I am having an attack are obviously different, but the panic, fear, and helplessness that Moss describes is spot on, at least for how I experience them. I liked that Moss was sensitive and he didn't put on a tough guy persona. There are harmful stereotypes when it comes to men in general, but specifically black men having to be this tough person and they're not allowed to be emotional. So it was nice to see him show a sensitive side. He has a fantastic relationship with his mom, and I am all about great parent/kid relationships in books.

However, something that seemed to happen a lot with Moss is every time something horrible happened to another character, somehow it became all about Moss and how it affected him. I understand he's the main character but it felt really odd. One of his friends gets really hurt, and it became how Moss feels. Another friend dies, and instead of a lot of the sympathy going towards his mother, it went to Moss instead. The mother even said "this must be so hard for you" and it made it  seem like the loss was harder on Moss than the deceased's own mother. There is a scene where the person responsible for the death apologizes, and I swear the apology was longer and felt more heartfelt towards Moss than it did to the kid's mom. It just made me really annoyed with Moss at times because often it's not about him.

He has a great group of friends from what the reader sees of them, but they weren't fleshed out as much as they should have been. There are a lot of pacing issues with this story, especially around the middle mark of the book that I feel like could have been fixed so the extra time could have gone to the reader understanding Moss's friends a bit more. I know this a long book for a young adult contemporary book, but I don't mind the length if the page time is used well. And it just wasn't. But like I said, what we did get to see of them I did enjoy. They are a group of teens who are all out and comfortable in their identities which is always really nice to read about. It didn't feel like a big deal and it felt normalized. Coming out stories all have their time and place and they're just as important but it's nice to see them all out and comfortable in themselves.

However, there is one thing about his friends I really didn't like. He has a friend named Esperanza, a Latina lesbian girl who was adopted by rich white parents. Although she feels a bit like an outsider at her white majority school, because she grew up differently she doesn't always see Moss's side when it comes to racism. She tries, but she doesn't fully understand. And he kind of hates her for it. He often is angry with her and puts a wall between them. And then, when something pretty terrible happens to her, she finally "sees the light and understands now". And instead of Moss saying something like "I'm sorry you had to go through that" he acts like she had it coming and that he's glad it happened. Like she had to learn her lesson for not always agreeing with him. It felt awful to read, and not only for the reasons it should have been awful to read about. So although I liked Moss for the reasons I stated above, I also really disliked Moss as a character.

I loved the feeling of community. Especially in the scenes where there are meetings where the community is getting together to figure out how to protest what is happening and the scene where Moss chains himself to a flagpole. There is a feeling of togetherness and being there for each other which is always really heartwarming to read about, especially when its carefully spliced in with so much hatred and violence. Between the community and Moss's classmates, we have a wide diverse cast of characters. Latinex, black, bisexual/biromantic, non-binary, trans, gay (own voices), Muslim, undocumented, diabled, and so many other characters. The book is rich with diversity and it never felt like the author was checking off a diverse character checklist. It felt natural and real.

I've seen some criticisms with the writing, and although I had issues with some aspects of the writing overall I didn't have too much of an issue with it as a whole. There were pacing issues, something I brought up before. There is something that doesn't fully make sense that revolves around a metal detector. I don't want to give much away, because of spoilers, but something happens with the metal detector that doesn't make any sense, and it felt like a plot hole that could have been easily fixed by being written a different way. The last thing about the writing that negatively stood out to me was the dialogue. Often with the teens in this book, they didn't talk like teenagers but they spoke like a grown adult writing teens. I think it sticks out pretty harshly, and although it wasn't consistent, it happened enough that I noticed it. Other than that, I enjoyed the writing. Like I mentioned earlier, I was moved by a lot of moments in this book. The sad, heartwarming, happy, and other moments all had me in tears. And although, sure, I am a big baby who cries at almost all the books I read, I think it a book has moved me to tears it's probably doing something right.

Overall, I do recommend this book. Being a white person, I cannot speak on the representation of the characters and the experiences they have. I do try to listen to communities of minorities and their experiences, and from that it seems like many of the issues The Hate U Give, Dear Martin, and Anger is a Gift tackle are issues that are prevalent in today's world everywhere. So if issues like Black Lives Matter, police brutality, racism, oppression, etc are topics you want to read more about I think the three I listed above along with so many more (I know Jason Reynolds is another author who writes about these themes) I say buy or check out from your library. I do think that this book is the weakest of the three because there are definitely issues with the book, I wouldn't not recommend it if you've read the others and want to read more.

Thank you for reading!

Posted by Heather's Reading Hideaway at 10:35 AM