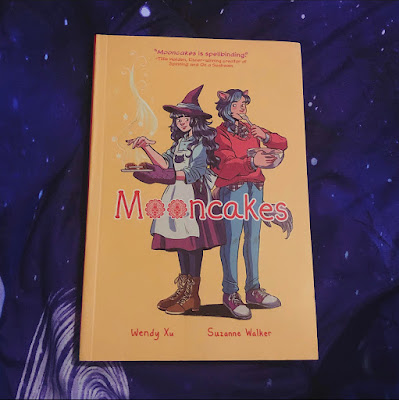 A story of love and demons, family and witchcraft.

Nova Huang knows more about magic than your average teen witch. She works at her grandmothers' bookshop, where she helps them loan out spell books and investigate any supernatural occurrences in their New England town.

One fateful night, she follows reports of a white wolf into the woods, and she comes across the unexpected: her childhood crush, Tam Lang, battling a horse demon in the woods. As a werewolf, Tam has been wandering from place to place for years, unable to call any town home.

Pursued by dark forces eager to claim the magic of wolves and out of options, Tam turns to Nova for help. Their latent feelings are rekindled against the backdrop of witchcraft, untested magic, occult rituals, and family ties both new and old in this enchanting tale of self-discovery.


This was such a fantastic graphic novel & story to end off  October! Thank you to the fabulous Erica @ Erica Robyn Reads for gifting me this gem for my birthday!

The characters in this story were so well written. Nova and Tam are such a cute pair both romantically and just as a witch/werewolf duo. They're also fantastic characters individually. Nova is a witch, who has recently lost her parents. She is not as confident in her abilities despite being pretty talented. She is an honest and sweet main character, it made it easy to root for her and for her success. Nova is a werewolf with a bit of a troubled past. Their pronouns are they/them, and although I do not think it is specifically stated that they're Non-Binary I believe it is implied. They are a bit mysterious, but obviously has a kind heart. Nova and Tam compliment each other nicely. Nova's relationship with her grandmothers is super wholesome. They're witches, like Nova, and although they definitely have that sweet grandma feel to them they're also very impressive and intimating as witches. Nova's grandmas also take Tam in under their wing and give them the love and support they need.

The only real negative (other than the villain thing) I can think of, but not really a full negative thing I have to say about the characters as a whole is that I wasn't a huge fan of Nova's friend Tatyana. I loved the idea of a science driven best friend of a witch who is skeptical of magic. But I found her more annoying than anything else. I think she was supposed to come off as charming but I think because we didn't get a lot of page time with her, especially with her and Nova, she felt out place in the story. I didn't blatantly hate the character, she had her moments and I think if the reader got more time with her I think I could have easily warmed up to her.

The plot was really fun and exciting but at times predictable. I don't think that's necessarily a bad thing but I thought it was worthy of mentioning. I thought it was a sweet and almost warm story. I think you can feel the love and care the characters have for each other, it comes through so nicely and I know I am a known emotional reader but I definitely got emotional while reading more than once. The only thing I wasn't the biggest fan of when it came to the villain, and when the villain was revealed. It was so obvious to the extent where I thought it was a red herring with how not subtle it was. But other than that, I really loved the story. There is a small reveal at the very end of the conflict that not only surprised me but I genuinely enjoyed it.

The artwork is so incredibly cute. I love how bright the colors are while also being warm and Autumnal. I think it paired perfectly with the story. I also loved both Nova and Tam's clothing styles. I can't fully enjoy comics or graphic novels fully if I don't like the artwork, so if that matters to you I think that this graphic novel is aesthetically pleasing to read.

Overall,  I highly recommend this graphic novel!! It's such a sweet one and it's a perfect quick read for Autumn. If you're a fan of witches, werewolves, and other supernatural creatures this is the one to pick up. It's got all the things a good graphic novel needs, beautiful artwork, great characters, and an engaging plot. If you're in the mood for a good graphic novel, pick up Mooncakes.

Posted by Heather's Reading Hideaway at 10:51 AM