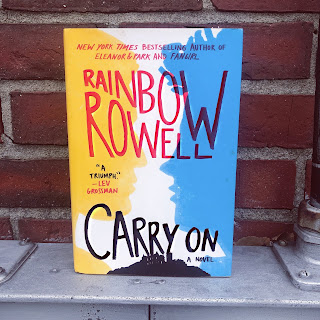 Simon Snow is the worst chosen one who’s ever been chosen.

That’s what his roommate, Baz, says. And Baz might be evil and a vampire and a complete git, but he’s probably right.

Half the time, Simon can’t even make his wand work, and the other half, he sets something on fire. His mentor’s avoiding him, his girlfriend broke up with him, and there’s a magic-eating monster running around wearing Simon’s face. Baz would be having a field day with all this, if he were here—it’s their last year at the Watford School of Magicks, and Simon’s infuriating nemesis didn’t even bother to show up.

Carry On is a ghost story, a love story, a mystery and a melodrama. It has just as much kissing and talking as you’d expect from a Rainbow Rowell story—but far, far more monsters.

"You were the sun, and I was crashing into you."
This book makes me so incredibly happy. It's my fourth time reading it, but the first time in a few years since I haven't reviewed it for my blog yet! I wanted to re-read it back in Spring to get ready for the sequel but that didn't happen, so I am happy I finally got to re-read it so I can continue to Wayward Son ASAP.

The characters in this story are what really make it a fantastic book for me. Simon, Baz, and Penelope are all so amazing and I love and reading about them. They're incredibly flawed characters who often mess up throughout this book. Which makes them feel not only more real as characters but as teenagers. All three of them approach it differently, but they all are so eager and motivated to make the world better. We also have a fourth character who isn't as present, Agatha, who I am not the biggest fan of reading. I understand and often sympathize with her as a character and what she goes through but I really disliked reading her POV. She often irritated me. However, I did enjoy the parallels between her and Lucy. I am hoping that if she is in the sequel (which I assume she is) I will be able to enjoy her more as a character because of everything that happened and how the story in Carry On ended for her. Baz and Simon's relationship was amazing and honestly my favorite part of the book as a whole They have fantastic chemistry both as friends and boyfriends, even if the latter is a bit new to both of them since they have spent so many years as rivals. Between the dialogue and bickering and the more tender moments between them, it was a perfect balance.


"I can tell she still finds me both loathsome and distasteful, but Rome wasn't built on mutual admiration."

There are also a few side characters that I really appreciated. Ebb being the main one. I really loved her and her friendship with Simon. Honestly her whole backstory and everything we learn about her both shatters and warms my heart. She's such a badass character. I also loved Baz's aunt Fiona, who was a riot. She's so funny and sarcastic and I can see where Baz gets it. Their relationship is super sweet, odd, but sweet. I even liked the friendship between Baz and Penny. Penny is fairly protective over Simon so it's hard for her to trust Baz, Simon's nemesis for years, but they have some moments together that made me really enjoy the beginning of their friendship.

The plot itself, between the Humdrum, the magic system, Simon's backstory, Baz's backstory, and even the Mage all is so addictive to read about. I couldn't stop reading, and every time  I had to put the book down I was thinking about picking it back up. And I knew what was going to happen next because it's a re-read. I think that shows how addictive this story can be. It has a good combination of epic fantastical elements and deep and even sometimes dark elements.

I know this story is supposed to be an imitation or parody of the "Chosen One" Harry Potter type of storytelling, and although that is present and obvious while reading I think it stands pretty well on it's own. I know some readers disagree with that, and think it's too close to the Harry Potter type format to be considered it's own piece of work but I cannot disagree more. Sure, there are similarities but I think the characters and unique aspects of the story hold up. There's this floaty feeling I get when I am reading book that feel like magic to me. Harry Potter being one of them. It's like the stories are concentrated bottled happiness that is poured into me as I read them and I get this feeling when reading Carry On as well. So I think it has the spirit of  Harry Potter and whatever in HP that makes it magic, but as it's own individual story, it's separate. Every time I read Carry On I get this giddy feeling that is exclusive to the books that click with me in ways others cannot.

Rainbow Rowell's writing style is so accessible and creative. Often when reading her books I fly right through them because of her writing style added with how addictive they can be. I do admit that the first couple chunks of this book is a little more slow paced than I remember from her other books, but I was never bored. I think once Baz shows up is when I start feeling genuinely addicted to the story, but that may just because Baz is my favorite character. I think the way she handled the magic system in this world was so unique and creative, and it almost made me sad that the story starts in their last year at Watford because I would have loved to know more about Watford's education.


"I know that things will only get better if good people fight for what's important."

Overall, I highly recommend this book! I think it's such a fun story that puts you through all the emotions. If you're a fan of fantasy books, Harry Potter, or are in the mood for a gay romance in fantasy setting then pick up Carry On! I already have the sequel, Wayward Son, ready for me to pick up next. I always thought this would be a stand alone, so finding out that we are getting more books makes my heart so happy.

Posted by Heather's Reading Hideaway at 9:51 AM