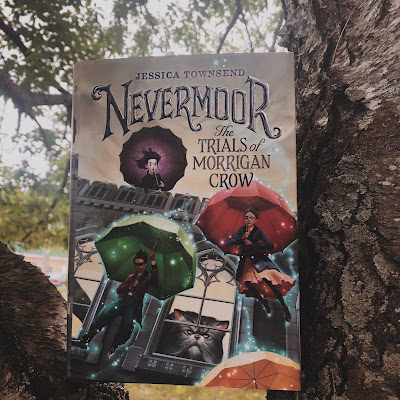 Morrigan Crow is cursed. Having been born on Eventide, the unluckiest day for any child to be born, she's blamed for all local misfortunes, from hailstorms to heart attacks--and, worst of all, the curse means that Morrigan is doomed to die at midnight on her eleventh birthday.

But as Morrigan awaits her fate, a strange and remarkable man named Jupiter North appears. Chased by black-smoke hounds and shadowy hunters on horseback, he whisks her away into the safety of a secret, magical city called Nevermoor.

It's then that Morrigan discovers Jupiter has chosen her to contend for a place in the city's most prestigious organization: the Wundrous Society. In order to join, she must compete in four difficult and dangerous trials against hundreds of other children, each boasting an extraordinary talent that sets them apart - an extraordinary talent that Morrigan insists she does not have. To stay in the safety of Nevermoor for good, Morrigan will need to find a way to pass the tests - or she'll have to leave the city to confront her deadly fate.

Middle grade (specifically horror and fantasy) is a genre I often have such a good time reading because of how fun the genre is but this book totally blew me away. I totally see why people compare it to  the feeling they got when reading modern children's classics like Harry Potter and Percy Jackson. Nevermoor gives me a similar swelling excitement that I get when reading Harry Potter, which is something that rarely happens.

"The night was uncommon and crowded with possibility."

The characters are so great, but especially the secondary characters. I'll start with our main character, Morrigan. I thought  Morrigan was really sweet and easy to root for, but I also found her to be a bit of a stereotypical neglected kid character. I am not sure if her character is purposely written like this so it's easy for the reader to put themselves in her shoes, but she had the similar thoughts, experiences, motivations, etc as any other unloved child main character that yearns for a family and friends to love and care for her. I never disliked her but I think she is overshadowed by the secondary characters.

Jupiter is amazing, and I found him to be such an exciting character. He obviously knows more than he lets on throughout the story but it's also obvious that he learns to care a lot for Morrigan. He's like her crazy uncle that she's kind of stuck with but she doesn't hate it. He's trying so hard to do right by her, be a good mentor, and keep her safe but he's also a bit all over the place. He's endearing and their mentor/student relationship is so sweet.

I also loved Morrigan's friendship with Hawthorne. She lived her eleven years basically isolated in her house with her family, who often treated her terribly, with no friends and no one to confide in. So finally she's met someone who likes her for her, and who proves to her that he's not leaving anytime soon. Each time she feels like she's done something bad or he finds out something about her that he won't like, she's ready for him to drop her immediately, and it's so heartbreaking at her relief when he tells her he still wants to be friends. It's so nice to see not only for her to have a true friend, but to see a friendship between a boy and girl character. Who knows if it'll turn into a romance type situation, I'd prefer if it didn't but a lot of the times it happens. But for now I really appreciate their friendship especially after Morrigan was basically banished by everyone in her old hometown, Jackalfax.

Fenestra is maybe the best character in the entire book. She's this incredibly large (like big enough to ride) domesticated cat. She's got a squished grumpy face and a bit of an attitude but is a big softy deep down. There's an incredibly sweet moment between her and Morrigan closer to the end of the story that maybe is my favorite scene in the entire book. Well, that one and the one about Fenstra talking about this kid and his pony. I don't want to say too much more without giving it away but Fen is so funny. Fenestra becomes a protector of Morrigan, just like Jupiter and Hawthorne. And even if Morrigan has proven she can take care of herself to a certain extent and think for herself because she has had to rely on herself basically her entire life, it's good to see her be protected and genuinely loved by so many.

One character I hope to learn more about is Cadence. She's not only a really cool character with an interesting talent but I would love for Morrigan to have a girl friend. There is some girl on girl hate in this book between Morrigan and a stuck up prejudiced character named Noelle. I am not a fan of girls hating each other seemingly for no reason especially if there isn't a good girl friendship to balance it out. So I am hoping that changes and Cadence becomes a good friend of Morrigan for that reason but also so Morrigan can have some more really good friends.

The plot itself was a little slow for me, at least in terms of getting into the story. I was never not enjoying myself while reading and every time I put the book down I couldn't wait to pick it back up, but there was a spark of that important something missing for me. Even if I was greatly enjoying myself, I kept getting distracted and pulled out of the story. There was something blocking me from getting so into the story that I lost track of time. However, that does change at the last 100 pages or so when the plot really picks up and we are at the big ending of the book. So I am thinking maybe it is only because there was a lot of explanations and build up for the world and characters and I'm hoping that now that we are really into the story this won't be an issue while reading book two.

"And whatever you do, don't close your eyes."
"What happens if I close my eyes?"
"You miss the fun."

The writing is easy to read and often perfectly descriptive. Sometimes while reading middle grade the writing can be choppy and too simplistic. But like Harry Potter, Percy Jackson, and other rightfully loved middle grade novels, Nevermoor doesn't talk down to it's young readers. The writing is clever and filled with beautiful imagery while also being accessible to it's young audience. Townsend's descriptions of the world, the food, and even the way the town of Nevermoor celebrated Christmas made me wish I could jump into the story.

Overall, I highly recommend this book to young readers and above. I think this series could easily become a new phenomenon with movie deals and all of that. It's honestly that good and I am so excited I finally read it. I already have borrowed the second one, Wundersmith, from the library and it's on my desk for me to read this week. I cannot wait to dive into it and see what is in store for these characters!

Posted by Heather's Reading Hideaway at 11:30 AM